Garage Sales Tell A Lot About A Person 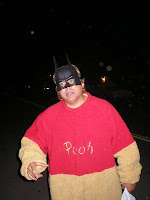 You learn a lot about a person when you scrooge through their scrap. In my quest for matching bond books this weekend for a commercial, I am shooting on Thursday; I visited over 30 people’s driveways, lawns, and garages. I found that the stuff they were bequeathing to us treasure hunters told volumes about their past and presents lives.

Where else do you find a grown man Winnie The Pooh Costume?
At a sale where the woman used to be a seamstress.
Tell Tale Signs:
Born again Christians were throwing away all their old romance novels, wine decanters and ashtrays.
Newly married people had newly emptied out photo books, tons short skirts, and all the old mismatching dishes. The regeristing concept clearly works.
Mommies with three children screaming while circling the items on display yelling “Mine!” were selling all the baby items, hoping that they would never catch this horrible human condition again.
People who were moving into their first home were selling everything. With a fresh house comes fresh credit cards, and that old stuff was not making into the new abode.
People who were downsizing threw away everything of their grown children.
If a woman had a garage full of tools, toys and cars, she had clearly thrown the husband out.
If the man had candles, decorative pillows and many copies of “Mars and Venus,” he had thrown her out.
Crack heads with no teeth who sat under dark glasses even in the over cast conditions were selling everything that was not nailed down. When asked about the items they would say it was their roommate who was away at work.
College kids sold IKEA furniture so they could eat a good meal, happy to sit on the beanbag chairs and use concrete blocks and pressed wood for a table. They also had a ton of schoolbooks (which I got them to donate to my Boaters For Books charity).

The expedition was a blast and I was successful. I found two volumes of encyclopedia’s that the people were more than happy to GIVE me. Plants, Book shelves and frames to decorate the set, and a few guilty pleasures of my own. I look for books, movies, and interesting house wares. I found a couple of first editions that are slated to go on EBay once I recover from my last bout of on-line nonsense. I found over 10 DVD’s that are classic and hard to find (Best in Show 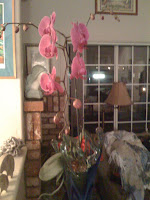