Ebay isn't for the light of heart 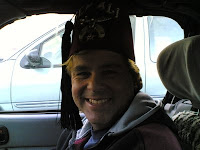 This fight with the crazy old watch guy was just to bizarre not to share. Read this before you decided to sell things on ebay.
This is how is started. Crazy guy bought a $20 watch from me. Then I got this email:
just received this item.....very bad packing as it seperated from that piece of plastic youm nwrapped it up in and rattled around in that oversized box! I assumed it ran prior to getting to me as that was my assumption by your ad wording. It is damaged in transport or...? It isn't worth a fraction of the $500 you said it is valued at. Please let me know mhow to return it and have my funds put back on my pay pal account. Thank You.
12 hours later I got this email:
Since it's the weekend and assuming you just work your shop m-f I'll give you the benefit of respect/fairness and wait until noon of the 9th of Feb to act upon this...after all, you have a 100% rating and must have been doing something right? I would get with 'your professional shippers' as the watch rattling around it that oversized container reflected badly upon you
So I sent him my address on Monday morning. I told him to send it back in the orginal packaging so I could see what happened. Didn’t mention nuthin about surgery (should have been my first clue)
Then I got:
teri...thank you for the quick response. I live out in the country w/garbage service but I burn burnables and I think I just burnt a bunch of paper/boxes so the box is no longer available. The proper way would have been a bubble wrap enclosed envelope rather than that 4"x6"x12" approx. cardboard box with just a chunk of heavy plastic wrap that was so stiff it wouldn't secure the watch. Plus, you paid more for the package/shipping that you had too...in my opinion. I hope your surgery went well unless your a doctor and perform them? I'll get it out Mon.
Five days later I got the watch. It was not damaged and worked fine. I refunded his money anyway.
Then I got this:
you must not care about negative feedback as your going to get some...told you I want to return watch and not reply w/your addre4ss...been over 48 hours...this isn't a thread, it's a promise!!!
Then he sent:
Thank You Teri!! Sometime I wonder if my retired life is so shallow that I tend to dwell on the trivial? Sorry to be so petty.....Need to sent the watch back. Please enclose your address. Ed For what it's worth, leaving you feedback....5 star!!

My Answer:
Yes, you should examine your temper and procedures. I got the watch on Thursday, that is why I refunded your money. So clearly you got my address. There is nothing wrong with it (I took it to the jeweler and they wound it and it worked fine). So what I see is that you just didn't like it, so you lied about it being broken. Maybe You should join Rotary, Mason's, Lion's and do something with retirement to help mankind instead of buying stupid watches.

His Reply:
Teri----did I send you the wrong watch? I swear the reason I asked for your address was the watch I got from you is sitting right here on my end table! I tried to verify the watch by your ad but no picture. I looked through by bought items and can't find a match either. Is that your watch that you had in the ad? Please accept my humble apology.
I'm 58 years old and it's not about the money.....it's about mutual respect. Are you the one that was away due a surgery and had someone pack your stuff? When the package arrived, it was in a very over sized box rattling around loose. This watch I have here is a piece of crap and looks like it came out of a cracker jack box that was driven over!
When I sent numerous e mails and you didn't reply, that's where the disrespect came from. You have to realize, if the roles were reversed, a buyer has no recourse except by feedback. When you returned my money, I left you 5 star feedback....only to leaving myself now open to your wrath. If this was a mistake (the watch), I again apologize.
Then I got this from Paypal:
Dear Teri, (STUPID OLD MAN) has opened a dispute for the payment made on Jan 30, 2009 indicating that the item they received did not match the originald escription
Disputed Amount:
· $33.00 USD
Not as described:
· Vintage Sheffield Pocket Watch-Swiss with Aluminum Case
2/16/2009 16:17 PST - Buyer: bought watch with a value of 500 dollars and by item description assumed it was working. received a piece of junk that was cracker jack quality and definetly not working. Was packed in an oversized box wrapped in a hunk of plastic unsecured. During shipping, item became dislodged and rattled around in box. These facts can be verified by Mother-in Law and my wife. Opened the box and tried to wind watch and it would not run. After numerous tries, seller ignored my E-mails. The amount of money wasn't important...it was the disrespect asnd total unprofessional manner in which this person does business. I received my money back after she received watch back. I was so totally surprised that I left her 5 star feedback and even lied that the item was described truthfully. Now I get e mail from her in a threating manner about how I basically a lier and that she filed a complaint against me.....no where admitting her part in this manner. There is my story, her story, and the truth.....I do not want to have this go any farther. I got my money back. She got her junk back.....All done.

My Not So Calm Reply:
Ed- Just what do you expect me to do? I refunded your money, even though you lied about the watch being broken. I gave you my address, I have received the watch back from you. What the hell are you disputing now? I think you are just plain crazy and you need to close this claim IMMEDIATELY .You are out of your mind. This deal is done!
His reply:
it was/is closed as far as I was concerned.....I apologized to you TWICE!! Then I got that message in RED saying what a piece of crap I was and how you bad mouthed me to e bay.....Who lied to who? The watch was not valued at 500 dollars and it did not work...my mother in law and wife will attest to that....The only lie I did was giving you a 5 Star feedback rating. Please Teri...I am again sorry about this whole thing. Whatever it takes to cfose this claim I will do.....How do I go about retracting my claim?
My response to Paypal (which had now put a hold on my account)
2/16/2009 17:07 PST - Seller: This crazy man has me confused with another seller. When I refunded his money, he told me that was impossible and that he still had my watch, all though he mailed it to me with a delivery confirmation of #03082040000066967560 from the USPS. I refunded his money, even though THERE IS NOTHING WRONG with the watch and I had the jeweler verify it. Now he is disputing it, even though he got ALL his money back. This is a gross miss use of this process. I have answered everyone of his emails in a timely and professional manner. HE does not know who or what he bought OR who he is talking to. I want this claim closed and to never hear from this crazy person again.
His Answer to me in an email:
I have contacted the dispute center and retracted my claim.......if that isn't good enough, I stated whatever it would take I'd do it.....Stated it was a mutual agreement? Ok with that? AGAIN>>>>OK?
What he sent to Paypal:
2/16/2009 17:29 PST - Buyer: I retract my dispute with Teri Bayus on item #?? Have resolved my issue and wish to cancel my claim. If this is not formal enough I will do whatever to make it so.
2/17/2009 14:50 PST - Seller: This is not formal enough. You must retract the claim with Paypal
My Email to Him:
You need to cancel the claim. Just talking to me in the dialog box does not cancel the claim. At this point you have FROZEN my Paypal account and I am not pleased about it at all. If you do not know how to CANCEL OR FINISH the claim, I suggest you call Paypal and have them walk you though it. I have been patient, but I am running low of good will to you. Please fix this problem. Teri
Now I am laughing so hard, this is ridiculous, except Stupid Old Man has somehow fumbled through and frozen my Ebay and Paypal accounts.

His Response:
Do I pull their number out of the air....I have done what I know how...I'm a senior citizen and I don't know or versed in E Bay...why don't you get the number as my dog is dying and I have diabetic problems.....I thought I was talking to them....
Then his pleas became more hysterical:
I DO NOT KNOW WHO OR WHERE TO CALL>>>>>PLEASE HELP ME AS I THOUGHT I WAS DOING THE RIGHT THING>>>>>I said I would and will
At Midnight I got:
been looking for a number to contact e bay...keep getting into a loop that takes me back to the start....even created a telephone pin no but looped back.....maybe in a.m.?
At 6:50 AM I got:
been on here since 6 a.m. can't figure out how to talk to someone or even get a telephone number to cancel the claim. You were also under the assumption that the dialog box was talking to e bay also. Doesn't the e mail your getting have a resolution person to contact?

I was starting to feel bad for the guy, Then I got:

Subj:
Your Dispute Has Been Escalated to a Claim
Date:
2/19/2009 3:20:23 PM Pacific Standard Time
So I sent him:
Ed- You need to go to your Paypal account at Paypal.com, go to Resolution Center Cases. Our case is number ???##?? You need to CLOSE the claim. They have a help button on the top left side if you need help.
The final communication:
PayPal has concluded our investigation of the following Buyer Complaint
HE FIGURED IT OUT!!! WHOOOO HOOOO

Status
The buyer cancelled this case and our investigation is now complete.