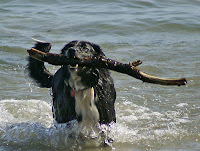 With my cool backpack loaded with Champagne, water for the dog and European sandwiches with American chips we jumped in the convertible GEO topless to let the dog surf the waves. I love exploring tide pools, Gary loves to gaze at the sailboats that he does not own. Our beach is a great dog beach and everyone’s off leash. They sniff butts, bump noses and chase the waves wagging away.

Tripper and Gary were enjoying a game of “get the stick” when the “Marley and Me” family arrived. Two little boys (about 4 and 5) with a large white lab, Mom following with baby girl in her arms (BTW, real Mom’s look nothing like Jennifer Aniston). Dad was swimming the length of the bay (Not a smart idea as a great white shark patrols there and has already eaten a nice lady swimmer). Ol’ Marley comes up to Tripper and steals his trusty stick right out of his mouth. Tripper did the growly thing, but not to upset the little kids, let it go. Mom says to me, “Oh you’ll never get that stick back.” Other dogs try to wrestle it from Marley’s clamped down jaw, but to no avail.

We go back to our blanket to drink the champagne and enjoy the sandwiches (one bite for us, one for Tripper). Everyone on the beach needed to comment on this stick business. People came and suggested, pried and basically wanted to talk. We talk for a living all week, no conversation was needed about the stick. It was gone, there are more. K- go away.

Trying to race the setting sun and its cooling shadow, we walked the beach. Tripper made sure that no seagulls were landing on the beach and Gary and I skipped rocks, found sand dollars, and waded in the sea. The beach was surprisingly empty because all of America was planted in front of a TV set watching men in tight pants run around.

To warm up, we went to the Avila Hot Springs. This 20’ x 28’ foot pool is my haven. The pool is 3 feet deep, it is rectangular in shape, it smells of sulfur and is pumped from a well of pure mineral water. It is around 106 degrees. It has signs all over the wall about being quiet and not drinking alcohol.

My healing waters, my favorite place. Except for the people. The Asian people get it; they come, soak, talk quietly, and then leave. But for some reason, white people just can’t be alone with their thoughts. I have had so many run ins with idiots in this pool, the staff knows me.

Years ago, when I first started coming it was a place where people in AA would come for social interaction. This was fine. They were meditative and nice.

One day, a man recited every moment of his recent colon-oscopy. To anyone within earshot. People talk about personal financial problems, how their spouse beat them, or neighbor molested them. I swear white people just cannot shut up.

Then some evangelist targeted the pool, trying to save the souls of the soaker. He decided to convert the Japanese ladies. They didn’t even speak English and he was trying to get them to accept Christ as their savoir. He preached at them, when they didn’t understand, he yelled at them. We waded thru the pool, getting in everyone’s face, asking about Christ. Most people just nodded to get him away. But he kept up on the Japanese ladies. He scared then and they got up to leave. That made me mad. When he came after me, I said if Jesus was alive right now, he would call you an ASSHOLE and would not want you on his team. He stood and sloshed thru the water aiming to hit me. I dived underneath and ran from the pool. The lifeguards ushered him out.

Last night it was just us and a couple of teen girls and one really red-red head in the corner talking to her self. As soon as we got in the pool, I knew there was going to be trouble. After a lengthy conversation with herself, all the while sipping on a big gulp that I know contained more than coke, she went for the girls. Telling them she could help their spirit. She told them they were powerful goddesses that were destined for great things, all seemed good. Then she grabbed one by the shoulders and started rubbing, poking, manipulating this poor child against her will. The girl cried out in pain. She did not let go, telling her she was holding in “the terror.” Her friend finally peeled crazy Red off and they ran for the locker room.

I knew I was next. She talked to herself quietly in the corner and then swam over. She started the slurred conversation saying how a Profit had said we were supposed to meet. She explained that red heads were stronger and better than Ninja’s. She told me I was strong, wise and ornery, maybe a bit bitter. I just nodded and agreed, trying not to laugh or encourage her. She kept saying the same sentence over and over. Gary had enough and calmly explained that we come here for quite and peace and asked if she could respect that and go talk to the rocks in the corner, (he didn’t say that, he was very nice).

She slid away for about 5 minutes, then the talking to herself started again and she darted after me. She tried to take hold of my shoulders, claiming my scapula was holding too much. She needed to massage me. To get the demons out. Aint no way the crazy bitch was going to touch me; I’ll show here Ninja Red Head. She chased me around the pool. Gary giggled, and then I stood and told her we were leaving. She claimed she could tell I was having family issues and went back to her big gulp.

I went to the front desk and told them they had a drunk alone in the pool and if they didn’t go get her, they next number they would dial was 911.

I think I am a crazy magnet.