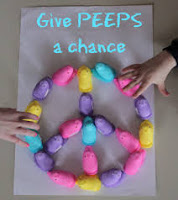 I have a chicken problem. I do admit it is 110% my fault. It is a kind of comedic relief of large proportion that tends to linger around my existence, so I felt I must share. 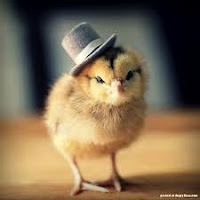 For Easter this year we bought six peeps for the grandkids to enjoy. Six little fuzzy butt cuties that entertained us all for hours. They were guaranteed to be 98% hens. I was raised with chickens, I didn’t remember them being this much fun. My husband learned that they love to eat bugs, moths, spiders and he could be heard laughing like a lunatic while watching the little dinosaurs tear the insects to pieces as they devoured each one. 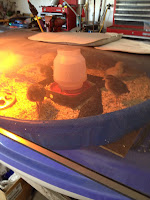 After their initial box stage, a more viable option had to be found to house them. They moved to the garage and the little blue swimming pool was commandeered for the bottom; screens were removed from the window to place over the top so the baby chickens would not jump to their death. Water and food dishes had to be emptied, cleaned, and filled four times a day. This was still fun, as my city raised hubby had never experienced foul enjoyment and they were cute and small. For his birthday, friends bought chicken accessories. He named all six.

As they grew, I decided the goal was to develop free eggs at as little cost to us as possible. 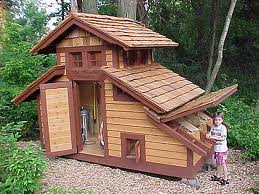 A sane person would have bought the fancy, all encompassing coop for $500 at Farm Supply. But sanity has never been one of my problems. I wanted to build our chicken kingdom using only repurposed materials. Craigslist Free category became my obsession.  When they out grew the pool, I found a rabbit hutch that was uninhibited by cost as long as I extracted it from someone’s uncles yard. This three-tiered palace was perfect for rabbits that like to scoot and burrow, not so much for chickens. We cleaned it up, made ramps and begin to teach the hens how to walk up and down them. With no mother hen to guide them, I became their teacher. They lived outside our dining room window and we watched and trained chickens for hours.  I cleaned up mountains of poop.

I found free apps on my IPhone with kindred chicken spirits with chat rooms and advise boards. At parties everyone seemed to be trying their hand at a backyard flock and had suggestions and stories. I spent hours at Farm Supply begging for clues and loading 50-pound bags of scratch into the trunk of my Jag. 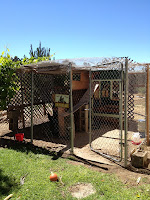 We decided their next domicile was an abandon dog run in our side yard. I repurposed dresser draws for nesting boxes, curtain rods for roosting dowels, plant trays became feed bowls.  The minute I put the little buggers out to free range, a wildlife menagerie showed up.  A pair of hawks circled above, a gaggle of squirrels, gophers and rats burrowed underneath, neighbor dogs tried to grab some chicken haunches and deer came to try and steal the corn kernels. We fortified the coop with old avian wire over the top (found in the neighbors trash) secured with florescent cable ties. We secured the bottom with bricks and ancient lumber. This was not one weekend project, but six long sets of days filled with wire abrasions and rusty nails.

After all that, my husband opened the door and let them roam the yard.

We did teach them to go home to the coop and roost at night, a comedic scene that must be placed in a movie.

During this process we discovered that owning chickens, means owning a special pair of “chicken shoes” as they are quite prolific at defecating.  Piles and piles of the slippery, smelly stuff vacate their bodies at an alarming rate. It is disgusting, but great fertilizer so it was repurposed to my new garden.

We were enamored love with the Girls and moved our patio chairs to watch them, our own chicken TV. 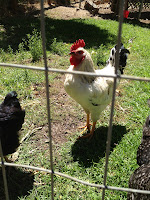 Then early one morning, a sound like a baby crying emanated from the chicken house. I ran out as the sun was emerging over the hills to see one of my girls crow. Cock-a-doodle-do is not a sound I ever wanted to hear again at 5:00am. The next day, it was two girls crowing, by the weekend, four were at it. We accessed the chicken apps and were told in the absence of a rooster, some dominant hens crow. I wanted to believe it. I was a fool. We had four roosters.

The problem is that there is no exit plan for pullets turning into roosters. Coq au vin was the first suggestion. That meant chopping off a head, watching the body flit about headless, hot water emergent to remove feathers and the dreaded hand up the butt to pull out all the innards. I did that in my youth, I wasn’t doing that in my backyard.

Farm Supply wouldn’t trade me; chicken ranches didn’t need more Roos and the butchers laughed at me. People suggested dropping them off in the Village, a quaint little hamlet where so many roosters have been abandoned; it is now a tourist attraction. Not any solid exit plan existed. The four turncoats now had waddles, tail feathers and were squawking all day long. Plus, they were picking on the two hens we did have and each other. Chickens are cannibals, especially if there is not the right boy-girl ratio.

Now that we had invested so much heart (no money expect for one roll of chicken wire) into this elaborate coop and the taste of fresh eggs in the morning was so close, I was not giving up. We forgot to ask how long this process takes and learned hens do not lay until 6 to 7 months old. I returned to my Backyard Chicken group and found that you must introduce hens the same age or we are back to the cannibalism stage.

Like a sane person, wroth with denial, I returned to Farm Supply and bought 12 peeps.
I was starting over.
Dammit. 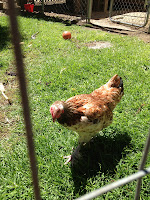 I returned to Craigslist and found 2 hens the same age as mine that were offered free. It seems they got four peeps for Easter, all were hens, but the amount of fowl manure overwhelmed their small back yard and they need to reduce their flock. We met in the Trader Joe’s parking lot and a box of hens (Elvis and Farrah) was tooted back to our chicken castle.

We have to divide and separate the coop, as chickens do not take kindly to each other. Now I had to feed, clean, water and check on two flocks, I mean three, for there was 12 little peeps back in the pool in the garage. Starting over.

Sleep past 6:00am became impossible.

Craigslist saved us again with a solution to our Rooster program.
With my circus background I can’t believe I didn’t think of this solution.
We have a local zoo.
That has a resident tiger.
And he love’s chicken.
Especially live ones.
So our Roos became tiger food.

Next stage is actually getting eggs (two more months away). Then we will introduce the new flock to the mature one and I am sure we will have more food for the tiger.

My eggs come with stories, so I will be selling them for $10 a dozen.

This is a story based on a belief that you had, that was changed. Elaborate and show how the change of mind took place, how it changed you or those around you and what it meant in the learning. This is a good way to take one of life’s incidences and use it to drive a plot.

And send $10 if you want really good eggs. 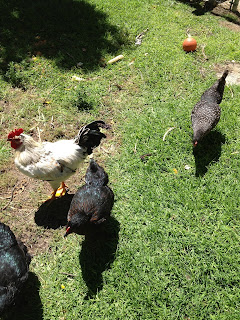 Email ThisBlogThis!Share to TwitterShare to FacebookShare to Pinterest
Labels: backyard chickens, chicken, what to do with roosters, Writing exercise