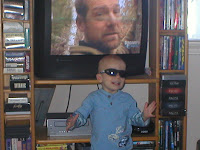 I don’t like being a retail hostage. Where the blaring Open sign screams to the world that you are at the customers beck and call until the close sign drops. Although I have a great sign I put on the door that reads “Gone to fight with my husband, back in 10 minutes” works wonders. However, I’m a capitalist pig that wants every nickel I can squeeze out of the world, so I have to be sure I am going to win a fight before I close the store during regular hours.

I detest being a cable hostage. For three days now, the internet/cable company has made an appointment with me to come and fix the snow the permeates my TV and “Sorry, Internet Explorer” is all I am surfing. Three days, each with three-hour windows, I have been held captive. Computers call me to confirm and then nothing. No knock on the door, no dog barking uncontrollably, no cable butt crack showing as he climbs behind my TV. Today after the fourth hour of waiting and doing chores I fully intended on avoiding, a computer called me to have me take a survey on how I felt about the cable company’s service. I scared the computer with my profanities. The deadline has past and we are on tomorrow as any hope of being hooked back up to the 21-century technology.


Here’s the funniest part, each time I talk to a rep, they have to try and up sell my on more products I should buy from their company that won’t work. I have officially abused over 10 telephone operators so far.

So I am tying my husband to the bed, bringing out the new toys and going to be the master over a hostage. Today. Who knows how I will deal with it tomorrow.