This is the Coolest thing I have ever done! 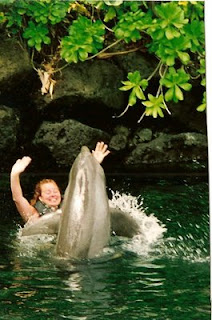 A few years ago I conned my way into a dolphin training program in Hawaii. I spent 5 days learning to train them and spending time with them. It was the best thing I had ever done. They made me start by learning their training techniques. They put me in a room with a dollhouse and a mouse. I had to train the mouse using a clicker (also called a bridge) to open doors, unroll carpet, and go get a flag. With their techniques and a little cheese, I mastered Stuart in 2 hours. Next, they gave me a dog from the pound. I had to train him to sit, stay, down, roll over, and jump thru a hoop. I had the clicker and some kibble, but I also had to learn to be the most exciting thing in the room for the dog to pay attention to me. Not a problem, I jumped, squealed and cajoled the little mutt.

After that, I was deemed ready for the dolphins. I got a fanny pack and filled it with squid and fish heads. I worked first with two young dolphins, getting them to come when called, jump, do tricks. I was then graduated to the big male. His name was Ono and he was a 12-year-old 1500-pound sweetie. With him, I had to do husbandry. I had to brush his teeth (very sharp), take blow whole samples, check his flippers, and his general health. I got to hold on to his fin and he towed me around the pool. Then he swam up, opened the zipper on my fanny pack, and ate all my fish.

When dolphins are happy, there belly’s turn pink. They are also the only other animals who have sex for pleasure besides us. Ono liked me lots. I spent hours with him and at night, I would come out on the balcony that was above the dolphin pond and he knew my call. It was clearly a life-changing event. These creatures are magical. It took me months to explain it.

I came home and used the training techniques on my dogs, (previously thought to be untrainable Siberian Huskies, kids- ditto) and husband. Now I see the wild dolphins when I walked the beach in the morning and long to stroke their belly’s or hold on to a fin and sail away.


Watch this video, it is amazing.
Dolphin Stampede

Email ThisBlogThis!Share to TwitterShare to FacebookShare to Pinterest
Labels: dolphins